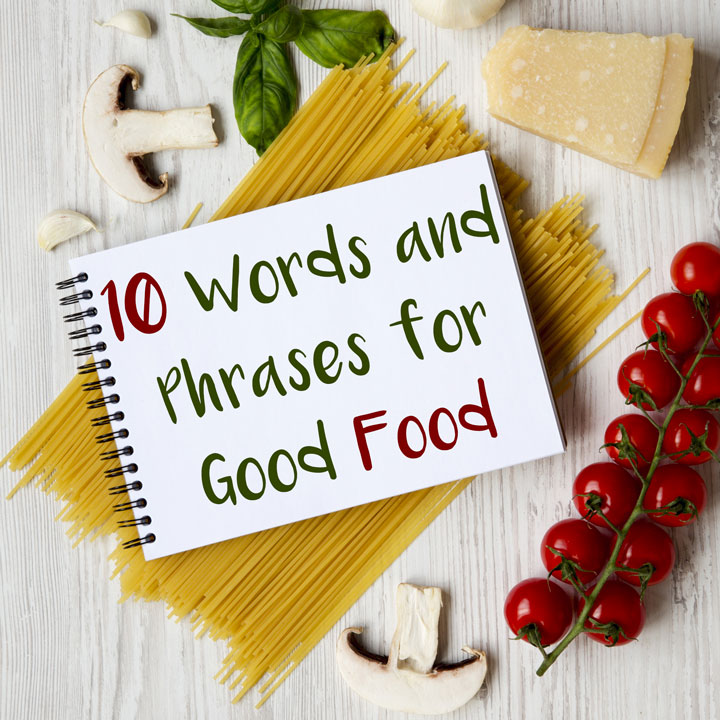 If there is one thing Italy is renowned for besides vespas, classic art and hand gestures, it is the delicious yet extraordinarily simple cuisine. From the various pasta dishes to the much-loved pizza, there is little that won’t send your tastebuds into overdrive.

Being able to paint a picture of these mouth-watering dishes with a variety of expressions is key to sounding like a native Italian, so to lend you a helping hand, we’ve compiled some of the most useful words and phrases you can use to describe buon cibo (good food). We hope you have fun using them!

The first word all learners should add to their Italian vocabulary is the adjective buono. Although it has other meanings such as nice, kind or positive, it literally translates as good or tasty when referring to food. It can be declined to show gender and number: buona (feminine), buoni (masculine plural) or buone (feminine plural).

Wow, this cake is so good! What did you put in it?

To say that something is very/extremely good, you can add on the ending -issimo to form the superlative absolute: buonissimo.

If you want to pay someone the highest compliment for their cooking, an excellent alternative to buono is the word squisito meaning exquisite or delicious. It too can be declined to squisita (feminine), squisiti (masculine plural) and squisite (feminine plural).

We ate really well. The sandwiches were truly delicious.

Ottimo (ottima / ottimi / ottime) translates as really good or excellent when talking about food. It is a frank and matter-of-fact kind of expression that isn’t as emphatic as squisito but conveys more enthusiasm than just buono.

Really good! It’s not every day that you eat an ice cream this good.

The word eccellente (plural: eccellenti) is the same as the English word excellent. Despite being used less than some of the other words on this list to describe food, it remains a valid option.

Wow, the desserts are excellent! We should come back next week.

If you want to say that a dish is full of flavour, you can describe it as being gustoso (gustosa / gustosi / gustose) or saporito (saporita / saporiti / saporite). Note that unlike the expressions above, neither would ever be used on their own to compliment a dish. They always function as adjectives to describe a dish.

I never thought that such a simple dish would be so tasty.

Did you know that…?
There is a very specific gesture in Italian to communicate your appreciation for a delicious meal. Simply push your index finger into your cheek and rotate it back and forth, accompanying the gesture with an appreciative “Mmmm“!

In the video below (from 2:25), you can see how the two characters rely solely on gestures to say: I’m hungry, I’ll go and make some spaghetti. – Spaghetti? Hmm, nice! – You can’t imagine how good it is “al bacio” (spaghetti dish with tomatoes, tuna, mushrooms and bacon).

As you’ve probably guessed, the word spettacolare (plural: spettacolari) translates as spectacular in English. It is often used as a big, over-the-top compliment when talking about good food.

This pizza is more than just good. It’s spectacular!

English speakers might be tempted to use delizioso (deliziosa / deliziosi / deliziose) all the time because it sounds so similar to the word delicious. Although not incorrect, it it used much less frequently in Italian than in English when complimenting a dish. The more common meaning is adorable or charming in reference to a person’s character (e.g. una persona deliziosa = a charming person).

The first courses in this restaurant are delicious.

Two ways you can say tempting in Italian are invitante (plural: invitanti) or allettante (plural: allettanti). Both are applicable to food as well as other things such as deals, prices and people.

The menu is very tempting. If it isn’t too expensive, I’d like to eat here.

Another possible synonym is appetitoso which means appetising.

If you find yourself sitting at the table in front of a delicious-looking meal, here is a great phrase you can use! Fa venire l’acquolina in bocca is the way you would say It makes my mouth water in Italian. It is used very frequently, so if you drop it into a conversation at the right time, you’ll sound like a true native!

The smell of that steak makes my mouth water.

Have you ever started eating something delicious, only to find that you just can’t stop? If so, you’ll love the expression uno/a tira l’altro which literally translates as one pulls the other. Two possible English translations are moreish (also spelled morish) or addictive.

The whole world knows that chocolates are moreish!

Can you think of any other words or phrases for good food? If so, let us know in the comments section below! 🙂