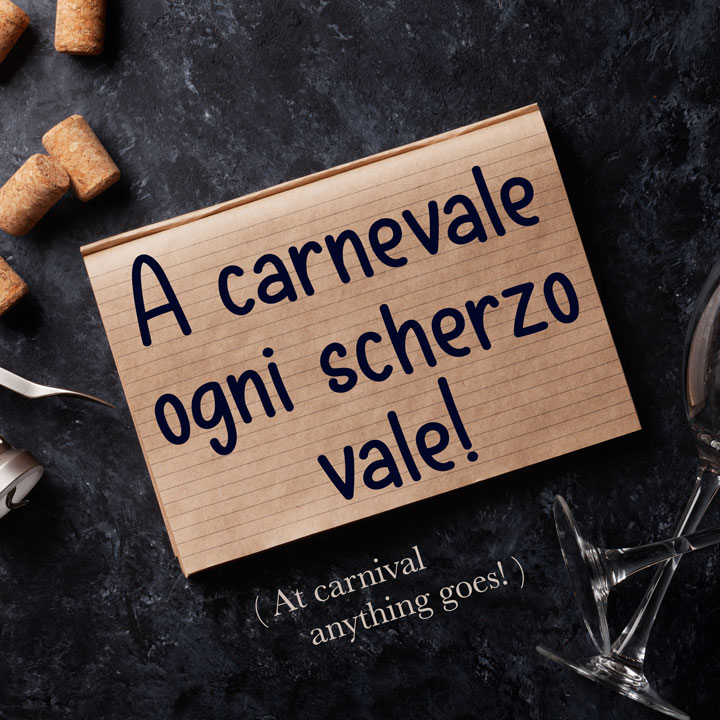 Winter (inverno) can be a gloomy time of year in Italy, but it is brightened annually by the arrival of carnevale (carnival), a festival during the week before Lent (quaresima) involving music, processions, dancing and people dressed up in elaborate costume.

A fun saying you can learn in preparation for this beloved celebration is A carnevale ogni scherzo vale!

At carnival anything goes!
(Literally: At carnival every trick counts!)

This phrase breaks down as follows:

A preposition that translates as at, to, in, by or on depending on the context. In this case, it means at.

The word for carnival in Italian, from the Latin carn– (flesh) + levare (to put away). According to La Stampa, it can be capitalised or lowercase because modern Italian tends to do without capital letters that are not strictly necessary. However, when referring to a specific carnival, for example the Carnevale di Venezia, the capital letter is required.

An adjective that means every or each.

A masculine noun that means practical joke, prank or trick.

The third person present conjugation of the verb valere meaning to be worth, to be valid or to count.

Italians say this phrase as a way of justifying any trick they might play on someone during carnival time, be it good or dirty. If you use this phrase outside of the carnival period – that is, anytime before or after the second half or February or early March – it will sound out of place since nobody says it during the rest of the year.