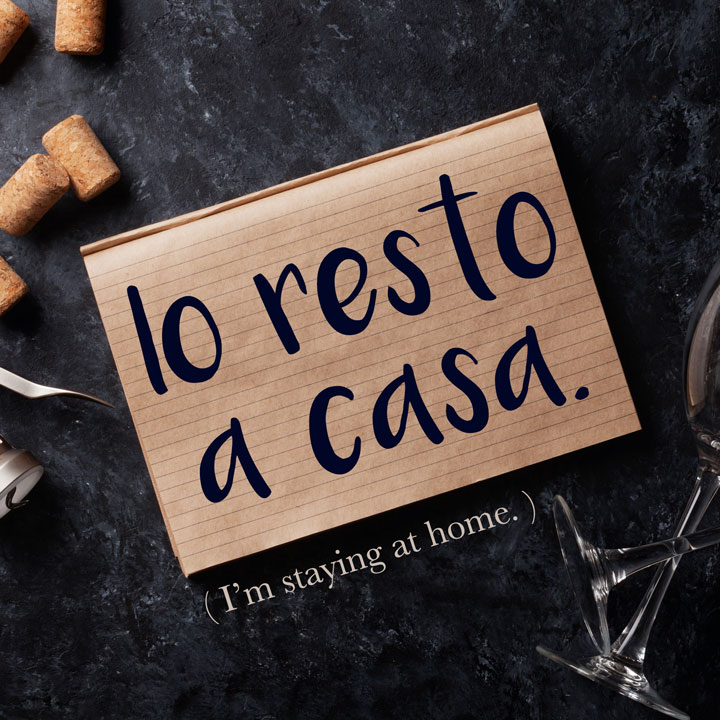 A hashtag that has been trending on social media across all of Italy is #iorestoacasa (Io resto a casa). It was started in response to people going out and socialising despite the Italian government’s plea to perform social distancing and self isolation during the coronavirus pandemic.

In English this phrase can be translated as either I stay at home or I’m staying at home because the verb to stay can take the progressive tense -ing. In Italian, the equivalent sto + gerundio form shouldn’t be used with verbi stativi (stative verbs), so it would be grammatically incorrect to say Io sto restando a casa.

The phrase is made up of the following components:

Other variations on this popular hashtag use the verbs stare (which also means ‘to stay‘) and rimanere (to remain) instead of restare.

In this context, the use of the first person singular pronoun io reinforces not only the importance of the message but also the person’s unwavering decision to stay at home. In more uplifting or colloquial contexts, Italians often ditch the pronoun altogether, starting with the verb directly (resto a casa – sto a casa – rimango a casa). The way it is conjugated tells us which pronoun it refers to.

If you see an individual or a group out on the streets when they shouldn’t be, you can use the commands Resta a casa! (for one person) or Restate a casa! (for a group). Both mean Stay at home!

Finally if you want to say Let’s stay at home! you can use the expression Restiamo a casa!

A phrase you’ll often see alongside the #iorestoacasa hashtag is Andrà tutto bene! which means Everything is going to be ok!