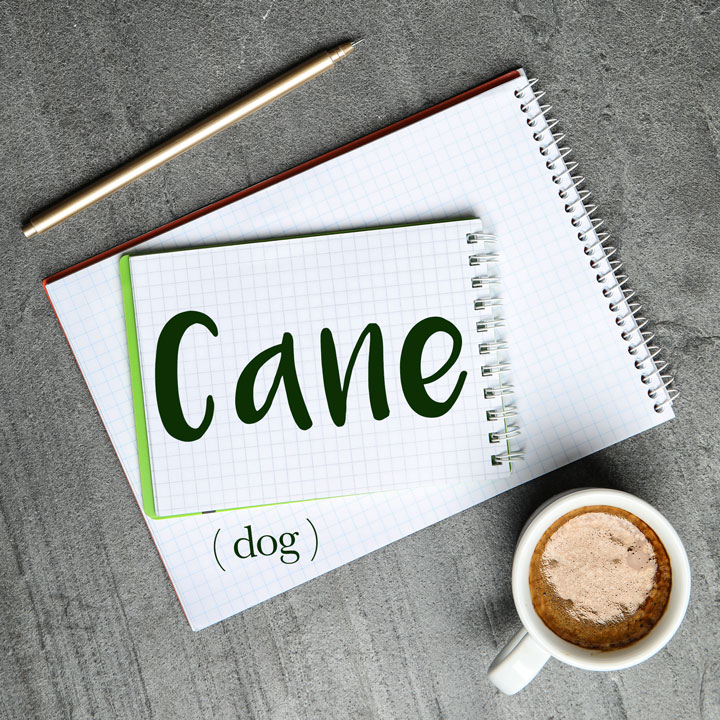 Today’s post is all about man’s best friend! The word for dog in Italian is cane (plural: cani), which is easy to remember as it sounds similar to the word canine. It comes from the Latin canis meaning dog.

The feminine of cane is cagna (bitch). In addition to referring to a bad or nasty woman just as in English, it can also be a pejorative term for an actress or a singer with little talent.

When talking about a puppy, Italians generally use the diminutive cagnolino or the generic word cucciolo (cub) instead of cane. Small dogs may also be referred to as cagnolino but cane piccolo is also common. A big dog, on the other hand, is called a cagnone or cane grosso.

Some of the most popular Italian dog breeds (razze di cane italiane) include:

According to this list, the most popular Italian dog names (nomi per i cani) in Italy in 2019 were Jack, Lucky, Leo, Oliver and Ettore for male dogs and Mia, Luna, Maya, Kira and Zoe for female dogs.

Cane can also be used to describe a person who is bad, cruel or incapable. It is from this figurative meaning that we get the insulting curse Figlio di un cane! (Son of a dog!). Two others curses you might hear are Mondo cane! (Dog world!) and Porco cane! (Dog pork!) but be cautious when using them as they can be quite offensive.

The notion of dogs as uncivilised beasts forms the basis of many Italian expressions that describe poor or miserable situations. A good example is the frequently used expression da cane / cani (of dog/dogs), which is another way of saying molto male (very bad) in Italian:

*Note: alla cavolo di cane literally translates as dog cabbage style. Cavolo is a mild swear word in Italian. Variations of the same phrase include alla cacchio di cane or alla cazzo di cane, where both cacchio and cazzo mean penis. The latter is considered vulgar so take care not to use it in polite company!

It may also function as a negative intensifier as in the case of the following examples:

The good news for all the dog lovers out there is that cane, when used figuratively, doesn’t always have a negative connotation. For example, un cane grosso is an important person whereas un cane sciolto is a person who refuses to follow the norms of society. If someone is extremely loyal, you can say that he or she is fedele come un cane (as faithful as a dog).

Did you know that…?
Sirius (Sirio), the brightest star in the sky, is nicknamed la Stella del Cane (Dog Star) in both Italian and English because it is part of the constellation Canis Major (Cane Maggiore).

Literal translation: a dog that bites its own tail
English meaning: to run in circles

Literal translation: to be like a dog and cat
English meaning: to not get along

Literal translation: as lucky as a dog in church
English meaning: to always be very unlucky

Literal translation: to look like a beaten dog
English meaning: to look downcast, sad or shameful, like a dog beaten by its owner

Literal translation: a dog that barks doesn’t bite
English meaning: someone who makes threats but does not act on them

Literal translation: there isn’t a dog
English meaning: no one is here

If you have just welcomed a puppy into your home, you may want to teach your new family member some basic commands (comandi) in Italian. (After all, what could be cuter than a bilingual pup!) Here are a few of the most common.